Above: from “Desert Realty.”

You’ve probably already come into contact with Ed Freeman’s work, albeit not the sort of work I’m writing about. After dropping out of Oberlin College in the late 1960s to pursue his dream of being a musician, he was signed to Capitol Records. “That didn’t go anywhere,” he said, until he ran into a friend who was connected to Columbia Records. His friend mentioned that Columbia was about to record another singer-songwriter, and asked Freeman if he wanted to produce the album.

That record, the first he ever produced, was Don McLean’s American Pie. The eponymous single achieved #1 positions on charts in America, Canada, Australia, and New Zealand, and the album itself topped the Billboard 200 chart for a month and a half until it was dethroned by Neil Young’s Harvest. Freeman continued to produce records until the 1980s. Production, he later told me, was never something he intended to do for the rest of his career; he wanted to create something on his own. 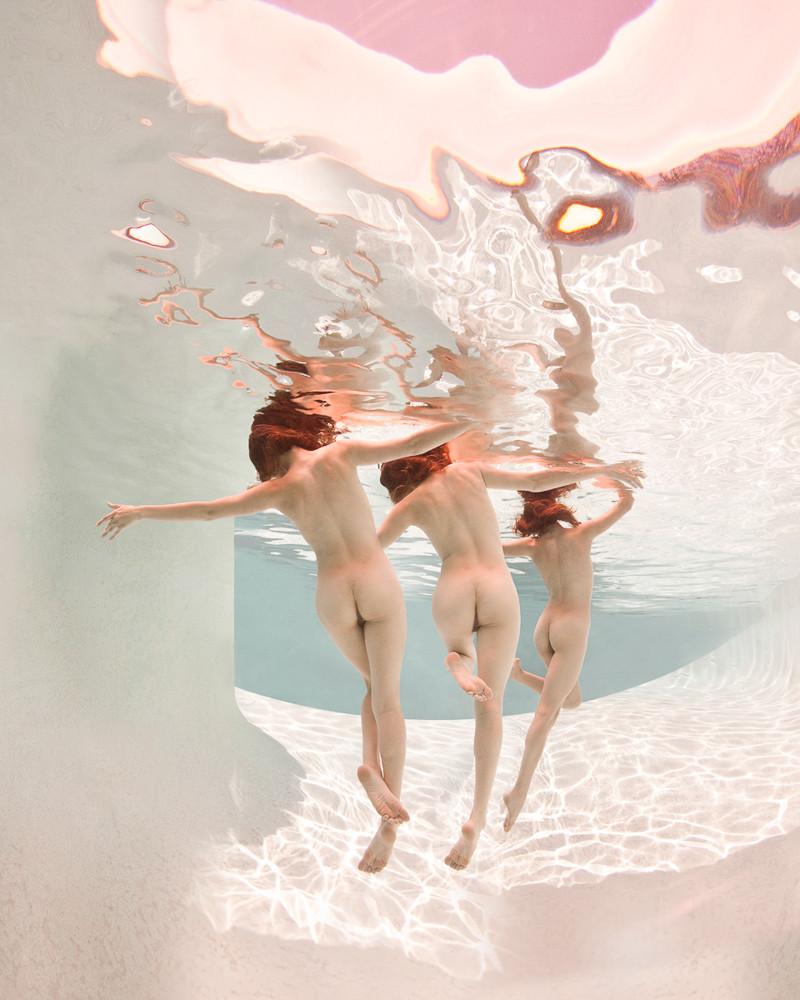 One of the many underwater nude shoots he’s done in the past few years.
(“[They’re] somewhat problematic,” he said, “because I can’t swim.”) Each final image requires several hours of individual editing and retouching.

So he started taking photographs professionally. He had been shooting for himself since the age of 12. At first, it was actor headshots; he had lived in Los Angeles since 1978 (Freeman, who grew up in Boston, considers himself “an East Coast guy, mentally and spiritually”) and the actor-headshot market there had always been dependable. He soon started accepting different kinds of commissions, shooting food and products and architecture. By 1990, he had fully transitioned away from music production. Since then, all of his income has come from photography, save for periodic record royalties.

The next few years saw two particularly pivotal moments in Freeman’s career. Around the same time as his transition away from music production, he was living in a loft in downtown Los Angeles, across the street from a cafe that occasionally hosted art shows. When he was given the opportunity to show some of his work, he thought for a moment about putting up his best headshots, but, as he later recalled, he thought to himself, “Maybe I should shoot some…oh, what-do-you-call-it…’fine art.'” His work from then on would no longer be exclusively commercial.

Freeman’s first fine-art project consisted of nude photographs in his studio. He later moved the shoots out to the desert, where he noticed that he “kept backing up to get more desert in the picture,” and realized he wanted to explore different subjects. Yet he was faced with a problem. The desert was a five-hour round trip, and the best light for desert landscapes could really only be found at dawn or at dusk. Dawn was too early, and at dusk, he “wanted to be at [his] motel with a glass of wine.” He thus decided to shoot Los Angeles buildings at midday, beginning his long-running “Urban Realty” series.

Importantly, at the same time, Freeman had also begun to experiment with Adobe Photoshop. His first encounter with the program was at a photography show in San Francisco in the early 1990s, where all of the photos had been altered somehow in Photoshop 1.0. He came out of that gallery wondering why anyone would feel compelled to alter their pictures so heavily, but six months later, he purchased Photoshop 2.5. His expert use of the program — he readily admits that it’s the only thing he can do exceptionally well on computers, which otherwise “terrify” him — has been the greatest unifying factor throughout his work since then. He often blurs the lines between photography and digital art, and sees himself as a “computer artist” who uses photography as a method of collecting data that he can use in his art.

Freeman’s use of Photoshop has remained constant, but his subject matter have constantly changed. “Urban Realty” and its sister series “Desert Realty” have remained, but he has since embarked on a diverse array of simultaneous, long-term projects. He has lately become especially well-known on social media for his underwater nude shoots (“[they’re] somewhat problematic, because I can’t swim”), which he said required many hours of editing and compositing. But his genre-agnostic attitude is, at its core, a reflection of why he started taking photographs in the first place.

“[There’s] an endless array of subjects I find beautiful,” he said. “I want to bring beauty to people so they can see it; I can’t convey with words what I can convey through pictures.”

Above image from “Desert Realty.” All photographs copyright Ed Freeman and used with his permission. You can find more of his work on his Instagram and his website.