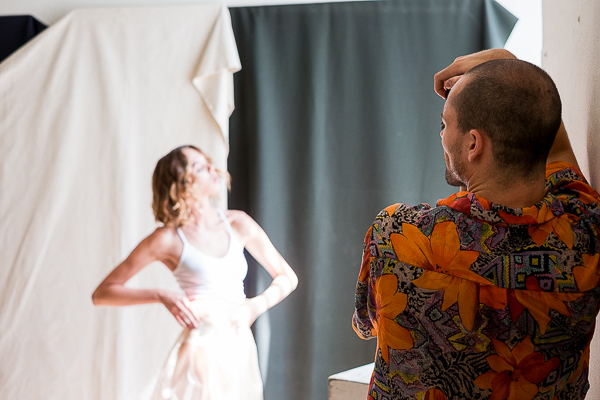 It’s 10:30 a.m. on a Saturday morning and Nick Sabatalo is shooting Charlotte, a model visiting the States from her native France, as she poses by the window of his private studio. She is young enough that in another life, she would be a year or two ahead of me in college, but in real life she’ll soon be featured in 35mm Magazine, the all-film fashion magazine that Sabatalo founded two years ago. Her mother sits on a couch at the opposite end of the room, watching closely and occasionally translating Sabatalo’s directions. (“Turn to the left.” “À gauche, Charlotte.“)

Charlotte is the first of four models Sabatalo plans on shooting that day. Some time earlier, their agency had commissioned him to do a series of test shoots: new models like Charlotte need a professional-quality portfolio that their agency can keep on hand, and one way to do that is for the agency to hire an experienced photographer like Sabatalo to spend a few hours shooting them in various looks. In some instances, such as this one, the looks are picked out by a professional stylist: in this case, Kris Tsvetkova, better known as @krisviva on Instagram, who had styled and modelled for Sabatalo several times in the past. 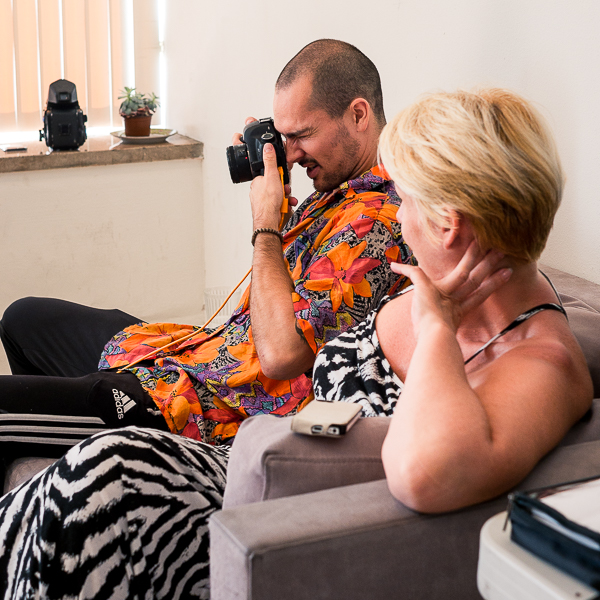 “Amazing,” Sabatalo says, having switched to his medium-format Mamiya RB67. “Hold that!” Charlotte freezes and Sabatalo fires off a few more frames. “Holy shit,” he exclaims. The roll runs out and I apologetically ask the makeup artist to tell me her name again. “Marlena,” she says. I thank her while Sabatalo goes over to a refrigerator and takes out a pack of Fuji FP-100C instant film, which was discontinued early last year. “I wasn’t gonna shoot this today,” he says as he loads it into a third camera, the implication being that Charlotte was so skilled that she merited being shot on this endangered stock.

(Which, by the way, she was, by every indication. Sabatalo rarely had to give her any posing directions: occasionally, he gave ideas that came into his head [e.g. “Just, like, an ‘I woke up like this’ moment”], but he mostly just gave her specific instructions about how her head or limbs were positioned for individual frames.)

The specific instructions reminded me of Sabatalo’s description of working with a photographer named Kenji, who inspired him to start shooting film. But in order to tell that story, we have to back up to 2013, when Sabatalo was studying marketing at Ohio State University. His goal upon graduating was to start a business with his father, something they’d been talking about for many years; he didn’t have any interest in fashion or photography at all. His experience in the industry began that year, when was recruited for Cycle 20 of America’s Next Top Model, the first cycle that included men in addition to women. He took a semester off and flew out to Los Angeles to start filming the show. When he got cut from the show, he decided to go back to Ohio, but he threw away his ticket before he went through security at LAX, deciding to stay in L.A. and keep modelling. 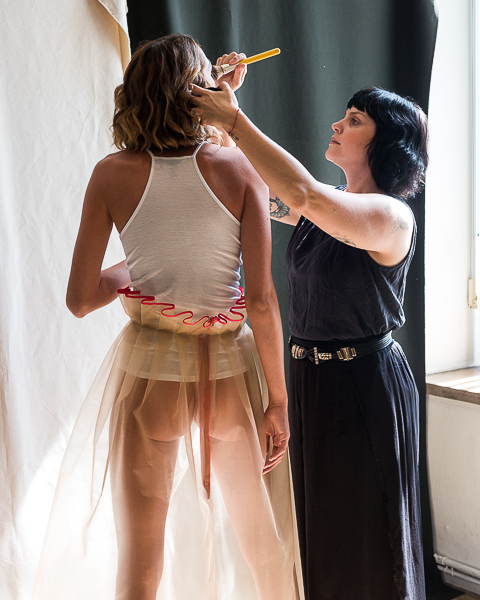 A year later, he shot with Kenji, who exclusively used medium-format film. They went to Venice for most of the day, walking around and shooting and occasionally using Sabatalo’s motorcycle as a prop. It was the first time he’d been shot on film, and watching Kenji work, he fell in love with the process of shooting film, before he had seen any of the final images. (When he did, though, he was blown away, later telling me, “It was like looking into a movie of my own life.”) Kenji only shot two rolls throughout the day, which, in his preferred 6×7 format, added up to about twenty total images. He was “a true director,” Sabatalo said. “He would move my jaw by, like, one inch” before pressing the shutter.

Kenji’s process and precision made Sabatalo decide to start taking photographs himself. He knew he wanted to shoot people and he knew he wanted to shoot film, except there were two issues: being relatively young, he had never actually shot a roll of film before; and, perhaps more importantly, he was broke. The latter problem was solved when a friend gifted him a Nikon F100 SLR, and he dealt with the former by communicating extensively with Kenji via email, asking him “tons” of questions, by Sabatalo’s later estimation. 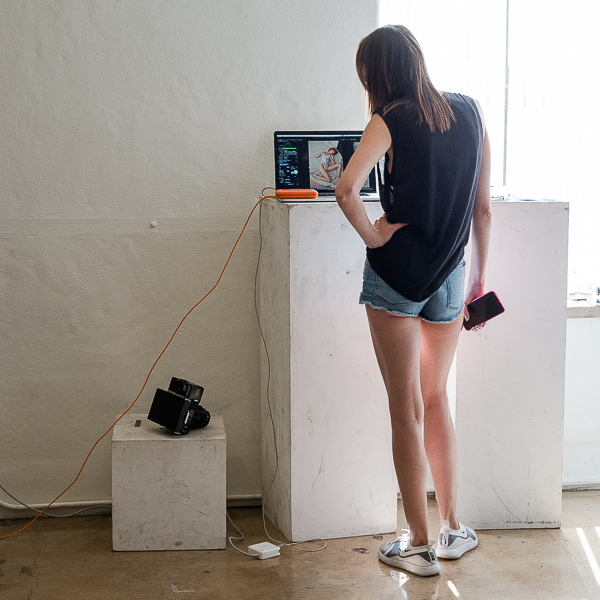 In early 2015, he shot his first editorial. Discovering there were few fashion magazines that published exclusively film photographs, he decided to start his own. He decided to call it 35mm Magazine after considering several other names, including, he later admitted, “Sin 4 Fashion.” From the outset, he made a policy against publishing retouched images. The idea of the photograph as a document of a unique moment in time was especially important to him — the magazine’s original slogan was “Fashion in Lifestyle Moments,” and he said he believes firmly that “a moment is not something you retouch.” Today, the slogan is simply, “Don’t edit me,” and the magazine donates a portion of its proceeds to the National Eating Disorders Association.

And, while it was also crucial that the magazine put out print issues, Sabatalo was careful to establish an online and social-media presence. Submissions began to pour in after every Instagram post, since he made sure to append a call for submissions to each caption, but he didn’t know for sure that he “had something” until he asked Louie Aguila to contribute to the printed magazine, who replied, “Consider me a regular contributor.” He went on to shoot the cover for the very first issue. It was those kinds of bonds — those “instant bonds formed through film,” as Sabatalo later put it — proved to be crucial to the magazine’s success. The magazine, he said, was the collective output of “a medley of people creating something fucking awesome, and way more awesome than we could alone.” 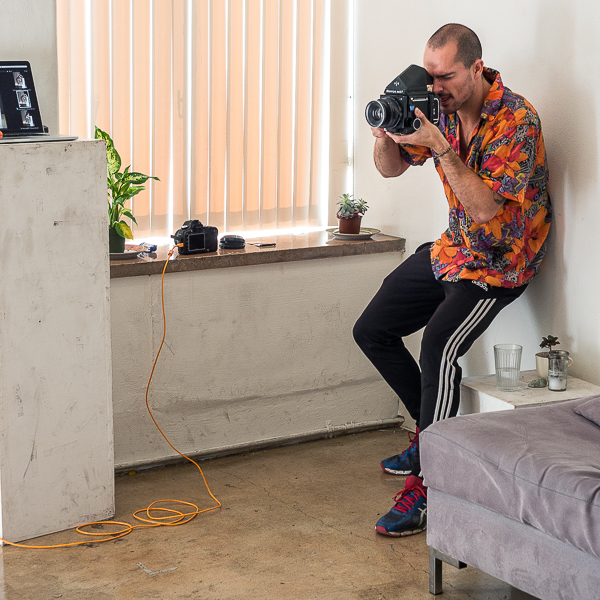 Nick with his Mamiya RB67.

Back at his studio, Sabatalo finishes shooting the pack of instant film. He peels apart each piece of film and then comes over to the clothing rack, where I’m standing and typing some things into my phone. (I had, like an idiot, forgotten my notebook, so every couple of minutes I would dart into the far corner and dictate things he had said into my Notes.) “Holy shit,” he says, making me worry for a half-second before I realize he’s looking over my shoulder reading back his own words. The next model, Morgan, comes in. She and Sabatalo introduce themselves to each other, and he says to her something I made a point of writing down because it seemed to encapsulate so perfectly the overall attitude of that day:

“Are you ready for this shit, or what?”

All the photographs here were taken by me and depict a test shoot that occurred the morning of 2 Sept. 2017 at Nick Sabatalo’s private studio in downtown Los Angeles. The model was Charlotte Blanchet, the stylist was Kristina Tsvetkova, and the hair and makeup artist was Marlena von Kazmier (website). Nick was the photographer and creative director for the shoot itself. He went on to shoot other models throughout the day; only photographs from Charlotte’s shoot are shown here. — P.W.C.

This profile would not have been possible without Nick Sabatalo’s incredible generosity and openness. Many thanks also to Allegra Messina for being one of the first to show me his magazine, and for driving me downtown on Saturday.

One thought on “Profile No. 9—Nick Sabatalo and 35mm Magazine”